The Foreign Minister’s Commendations are awarded to individuals and groups of?outstanding achievements in international fields, to acknowledge their contribution to the promotion of friendly relations between Japan and other countries. The Commendation also aims to promote the understanding and support of the Japanese Public for their activities. This year, the Commendation will be awarded to 58 individuals and 39 groups (of which 15 individuals and 10 groups are from Japan, and 43 individuals and 29 groups from overseas). The Consulate General of Japan at Chennai held a presentation ceremony of the Foreign Minister’s Commendations for Fiscal Year 2010 at the Residence of the Consul General of Japan at Chennai on 19 August 2010 at 15.00 hrs

The Commendation was awarded to ABK – AOTS DOSOKAI, Tamilnadu Centre to acknowledge their outstanding contribution to the promotion of mutual understanding and friendship between Japan and India over years. Mr. Kazuo Minagawa, Consul General of Japan at Chennai, presented the certificate of commendation to M. R. Ranganathan, Chairman of ABK – AOTS DOSOKAI, Tamilnadu Centre. 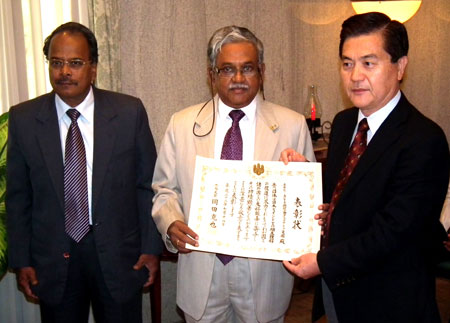 AOTS celebrated 2009 as its Golden Jubilee year and to commemorate this had invited the Success stories from all its Alumni associations. Of the nearly 200 success stories received, the top 10 entries were invited to present their success stories in Tokyo on 27th October during the AOTS Success Story Convention. During the convention, 10 Best Success Stories selected from 198 Success Stories submitted by 70 Alumni Associations from 43 Countries in the fields of Technology Transfer, Cultural Exchanges and Social Contribution.

Out of the Top 10 Success Stories the best 3 were selected for the Grand Prize and ABK AOTS DOSOKAI, Tamilnadu Centre received the award for it’s story in the area of Cultural exchange. This was followed by a two day, 8th AOTS Alumni Convention held at Yokohama Kenshu center with His Excellency, Governor of Kanagawa Mr. Matsuzawa giving his felicitations. The two day convention ended with “Yokohama Declaration” formed by the AOTS Alumni, about AOTS and AOTS alumni’s relations and future functioning of Alumni societies. Our Chairman M.R. Ranganathan Presenting our Success story Receiving the Award. 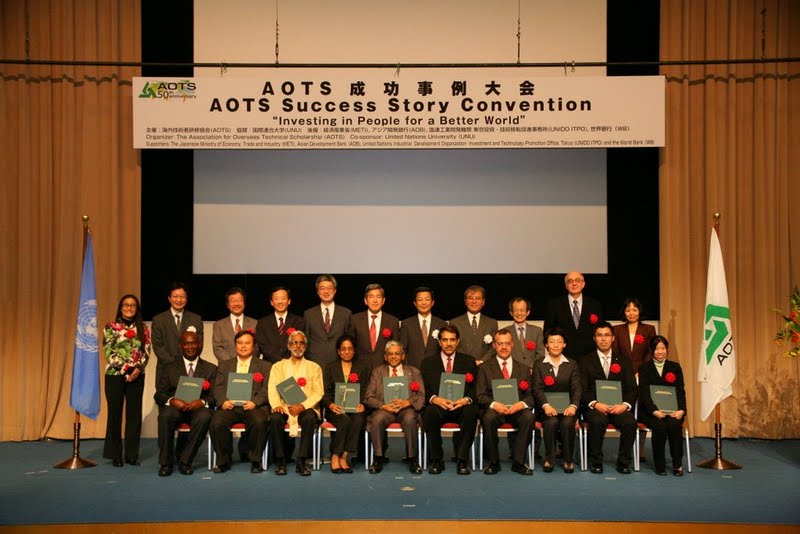 Every year during the Greenery day on April 29th The Government of Japan announces Awards and Decorations for Japanese and Foreign Nationals. The highest order of civilian award is called the Order of the Rising Sun. This year 2005, our Chairman, Mr. M.R Ranganathan had an audience with Hon’ble Prime Minister of Japan, Mr. Junichiro Koizumi on 29th April at New Delhi and in his presence His Excellency Ambassador of Japan announced that Mr. M. R. Ranganathan from ABK AOTS DOSOKAI, Tamilnadu Centre has been awarded with the decoration of ORDER OF RISING SUN GOLD AND SILVER RAYS. He is THE ONLY INDIAN TO RECEIVE THIS AWARD OUT OF THE 34 FOREIGN NATIONALS WHO HAVE BEEN SELECTED FOR 2005.

Certificate of Commendation on December 12 2002

TThe Consul General of Japan extended his deepest regards to Mr. M. R. Ranganathan, Chairman , ABK – AOTS DOSOKAI,Tamilnadu Centre, in recognition of his distinguished service in contributing to the deepening of mutual understanding and friendship between Japan and other nations.

Awarded by His Excellency Mr. Masayuki Makiya, Consul General of Japan in Chennai on 21 December 2002

We are glad to inform that our Chairman Mr. M. R. Ranganathan received the Commendation Letter on behalf of our Centre from Mr. Ogiso Yu, Director General, The Asian Students Cultural Association (ABK). And the other two awardees were from Thailand & Vietnam.